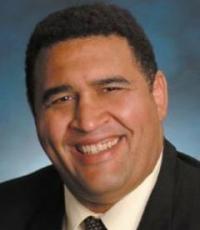 He was an All-American at Stanford and five-time All-Pro in the NFL; He was a key member of the 1985 New England Patriots Super Bowl team
Fee Range: $10,000 - $20,000
Secure Brian Holloway
for Your Event

A Stanford All-American, 1st round draft pick, and 5 time All-Pro, Brian Holloway excelled as the powerhouse and team leader at the core of the 1985 New England Patriots Super Bowl team.

In 1986, Brian was elected by his peers to forge the new directions in NFL policy, becoming the youngest Vice President of the NFL Players Association at age 23. He retired from the NFL in 1992 after eight seasons with the New England Patriots and two with the Los Angeles Raiders.

Today, Holloway is an international motivational speaker and renowned corporate trainer. Brian's strategies and case studies are his own. They are based on practiced disciplines and proven results, not old management theories that do not reach the people. His personal style establishes trust and builds instant rapport -- the key to bringing a team together. Entertaining while instructing, Brian uses multi-media technology along with actual game footage to show his critical points on achieving new levels of excellence. These powerful, high impact presentations have immediate value for every person competing for market share in a changing and turbulent economy.

Holloway's accomplishments have landed him appearances on Good Morning America, the Today show, ESPN, USA Network, and NBC Sports, and feature coverage in USA Today, The New York Times, Wall Street Journal, The L.A. Times, and The Chicago Tribune. He has testified before Congress, guest lectured at Harvard Business School, and been the featured speaker at the Stanford University Centennial Celebration. Holloway has also maintained qualifying entrance for Harvard's Kennedy School of Government.

Born to an Air Force family in Omaha, Nebraska in July 1959, Brian grew up to face and overcome many challenges--his youth spent adjusting to life in 12 different states, even being labeled a "slow learner." Persistence and an unstoppable spirit propelled Brian through his early struggles and on to academic and athletic awards though his high school and college years. He was heavily recruited by Harvard, Yale, Dartmouth, and Princeton, and showered with over 350 scholarship offers. He chose Stanford, and there earned varsity letters in both football and track under Coach Bill Walsh.

Brian's commitment to service grew throughout his playing days, when he helped develop the first College Degree Completion Program for Professional Athletes. Beyond the game, he helped establish the Challenger Center for Space Education--a living educational memorial to the ill-fated crew of the Space Shuttle Challenger. His community activism embraces the homeless and inner city youth, and he vigorously supports the Special Olympics. Brain maintains a seat on Stanford's Athletic Board and also shares his energy with D.A.R.E. and United Way.

Secure Brian Holloway for Your Event

Based on your interest in Brian Holloway as a speaker or for a personal appearance, Direct Sportslink has provided you additional links below for other sports talent with similar appearance fees, speaker topics, and categories that match Brian Holloway.