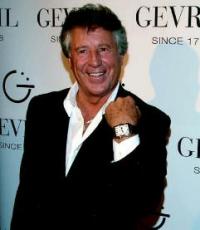 He is inducted into the Motorsports Hall of Fame; He won four Indy Car Championships
Fee Range: $50,000 - $75,000
Secure Mario Andretti
for Your Event

Mario Andretti and his twin brother Aldo began in Formula Junior Racing, Italy's answer to Little League Baseball, when they were 13. Two years later the Andretti family came to the United States and settled in Nazareth, PA. The twins worked in an uncle's garage and began racing a modified 1948 Hudson, taking turns behind the wheel. In their first four races, each of them won twice.

Aldo crashed, fracturing his skull, in the fifth start. That didn't stop the twins from racing, but their father refused to speak to them for a time. Aldo married and got out of racing while Mario climbed through the ranks, getting his first Indy car ride in 1964. He qualified fourth fastest in the 1965 Indianapolis 500, finished third in the race, and went on to win the Indy Car championship, finishing in the top four in 10 of his 17 starts.

He's the only person to be named Driver of the Year in three different decades, 1967, 1978, and 1984. He's one of only a few drivers to win races on paved ovals, road courses, and dirt tracks in a single season, and he accomplished that four times. At the time of retirement, he was second to A.J. Foyt in all-time Indy car victories, with 52, is the career leader in pole positions with 67, and is fifth in earnings with $10,887,392.

Secure Mario Andretti for Your Event

Based on your interest in Mario Andretti as a speaker or for a personal appearance, Direct Sportslink has provided you additional links below for other sports talent with similar appearance fees, speaker topics, and categories that match Mario Andretti.