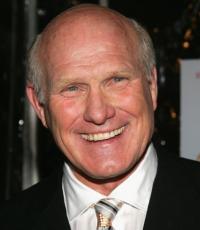 Bradshaw as been a TV analyst and co-host of Fox NFL Sunday. He played 14 seasons with Pittsburgh, won four Super Bowl titles in a six-year period (1975, 1976, 1979, and 1980), becoming the first quarterback to win three and four Super Bowls, and led the Steelers to eight AFC Central championships. He was inducted into the Pro Football Hall of Fame in 1989, his first year of eligibility.

A tough competitor, Bradshaw had a powerful arm and called his own plays throughout his football career. His physical skills and on-the-field leadership played a major role in Pittsburgh Steelers' history. In four career Super Bowl appearances, he passed for 932 yards and 9 touchdowns, both Super Bowl records at the time of his retirement. In 19 postseason games, he completed 261 passes for 3,833 yards.

Secure Terry Bradshaw for Your Event

Based on your interest in Terry Bradshaw as a speaker or for a personal appearance, Direct Sportslink has provided you additional links below for other sports talent with similar appearance fees, speaker topics, and categories that match Terry Bradshaw.