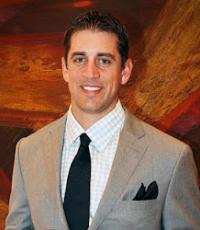 He was the quarterback of the 2011 Green Bay Packers Super Bowl championship team; He was named MVP of Super Bowl XLV
Fee Range: Contact Us
Secure Aaron Rodgers
for Your Event

Rodgers was selected in the first round of the 2005 NFL Draft by the Green Bay Packers.  He played college football at the University of California, Berkeley, where he set several California Golden Bears records, including lowest interception rate at 1.43%.  In 2004, Rodgers led Cal to a 10-1 record and a top five ranking at the end of the regular season.  He was awarded First-Team All Pac-10, and was a Honorable Mention All-American.

Professionally as of 2012, Rodgers is the NFL's all-time career leader in passer rating during both the regular season and the post-season among passers with at least 1,500 and 150 pass attempts respectively. He also held the league's lowest career pass interception percentage for quarterbacks during the regular season and the single season passer rating record. Rodgers led the Green Bay Packers to win Super Bowl XLV and was named Super Bowl MVP. As a result, he was named Associated Press Athlete of the Year in 2011.

Since becoming a starter for Green Bay, Rodgers has become known for his unique touchdown celebration which him and his teammates have dubbed the "Championship Belt."

Secure Aaron Rodgers for Your Event

Based on your interest in Aaron Rodgers as a speaker or for a personal appearance, Direct Sportslink has provided you additional links below for other sports talent with similar appearance fees, speaker topics, and categories that match Aaron Rodgers.