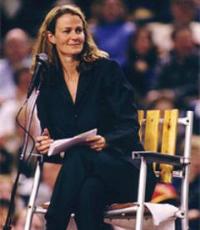 She is a member of the International Tennis Hall of Fame; She won a total of twenty-two Grand Slam doubles titles and a women's doubles Olympic gold medal in 1988
Fee Range: Contact Us
Secure Pam Shriver
for Your Event

Shriver first came to prominence as a 16 year-old amateur player in 1978, when she shocked the tennis world by reaching the women's singles final at the US Open. She stunned the then reigning Wimbledon champion Martina Navratilova in the semi-finals, beating her in straight sets 7-6, 7-6. She then lost to Chris Evert in the final 7-5, 6-4. Shriver also won the first of 21 career singles titles in 1978 at Columbus, Ohio.

Her most notable successes in future years came in doubles play. She won a total 112 career doubles titles. Shriver and Navratilova formed one of the all time great women's doubles teams, capturing 7 Australian Open, 5 French Open, 5 Wimbledon and 4 US Open titles. In 1984, the pair captured all four of the Grand Slam women's doubles titles. This was part of a record 109-match winning streak they achieved between 1983 and 1985. The pair were named the WTA Tour's 'Doubles Team of the Year' 9 consecutive times from 1981-1989, and won the WTA Tour Championships title 10 times between 1981 and 1992.

Shriver reached the World No. 1 doubles ranking in 1985. Throughout the 1980s, she was ranked among the World's Top 10 in women's singles, peaking at World No. 3. In total, Shriver won 133 top-level titles, 21 in singles and 112 in doubles. She is one of only a few woman players in the Open Era to win more than 100 career titles.

Shriver retired from competitive play in 1994 but has since maintained a presence on the professional tour, mentoring Venus Williams for a while and providing television commentary for ABC, CBS and ESPN in the United States, the BBC in the United Kingdom, and 7 Sport in Australia. Shriver was elected to serve as President of WTA Tour Players Association from 1991-94. She has also served as President of the USA Tennis Foundation, and on the Board of Directors of the United States Tennis Association. In 2002, she was inducted into the Intenational Tennis Hall of Fame.

Secure Pam Shriver for Your Event

Based on your interest in Pam Shriver as a speaker or for a personal appearance, Direct Sportslink has provided you additional links below for other sports talent with similar appearance fees, speaker topics, and categories that match Pam Shriver.