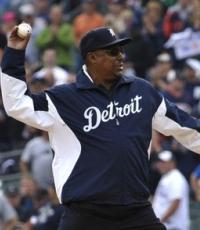 He was the starting second baseman for the 1984 World Series Champion Detroit TIgers; He was selected to 5 All Star Games, awarded 3 Gold Glove awards and 4 Silver Slugger awards
Fee Range: $2,000 - $5,000
Secure Lou Whitaker
for Your Event

Whitaker first played with shortstop Alan Trammell while with the old Double-A Montgomery Rebels. The two first played together in the major leagues when they were both called up to Detroit at the end of the 1977 season. Both players became starters by the end of April, 1978. They would remain teammates until Whitaker retired in 1995.

In 1978, Whitaker won the American League Rookie of the Year Award, hitting .285 with 71 runs, and a .361 on base percentage. Whitaker enjoyed what was perhaps his best season in 1983, hitting for a .320 average with 12 home runs, 72 runs batted in, and 94 runs. That year he made the first of five consecutive All-Star appearances. In 1984, Whitaker and the Tigers won the World Series.

In 1985, Whitaker set a record for Detroit second basemen with 21 home runs and, in 1986, was a member of a Tigers infield in which every member hit at least twenty home runs. He hit a career-best 28 homers in 1989, one of four times he reached the 20-HR plateau. Whitaker reached two career milestones in 1992, recording both his 2,000th hit and his 200th home run.

Whitaker set the standard for defensive play at his position throughout the 1980s. Lou Whitaker is also only one of a select handful of players ever to hit a ball over the roof of Tiger Stadium.

Secure Lou Whitaker for Your Event

Based on your interest in Lou Whitaker as a speaker or for a personal appearance, Direct Sportslink has provided you additional links below for other sports talent with similar appearance fees, speaker topics, and categories that match Lou Whitaker.