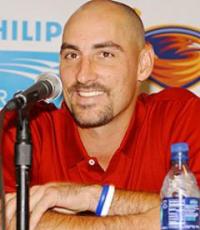 He is the son of Hall of Famer Rick Barry; A former NBA player, he is well known for his work as a NBA analyst for ESPN
Fee Range: $2,000 - $5,000
Secure Jon Barry
for Your Event

A Jon Barry personal appearance, Jon Barry speaking engagement, or Jon Barry endorsement will reflect well on your company. To hire Jon Barry now for any corporate appearance, fundraiser, motivational speaker event, personal appearance, autograph signing, or website endorsement please contact our celebrity agents at 1-877-6-SPORTS. We will contact Jon Barry or contact Jon Barry's agent and provide you with the booking fees and availability immediately upon your request. Direct Sportslink is the only sports speakers bureau and talent booking agency based in the United States securing only sports talent for corporations, associations, and organizations for motivational speaking engagements, personal appearances, and endorsements. We are the premier sports celebrity booking agency and a sports celebrity procurement expert. Accordingly, we will provide you with any relevant Jon Barry website information and booking agent details so that you can hire Jon Barry for your next event.

Barry is a former NBA player andis well known for his work as a NBA analyst for ESPN.

Barry is the son of Hall of Famer Rick Barry, and has three brothers: Scooter, Drew, Brent, all of whom are also basketball players. Barry has played for the Milwaukee Bucks, Atlanta Hawks, Los Angeles Lakers, Golden State Warriors, Sacramento Kings, Detroit Pistons, Denver Nuggets and most recently the Houston Rockets. He was a first round draft pick in 1992, out of Georgia Tech.

Jon's most memorable time as a player came in his two seasons playing for the Detroit Pistons. In 2001-02, Barry enjoyed a tremendous season off the bench, co-leading "The Alternatorz" with 6th Man of the Year winner, Corliss Williamson. Barry, Williamson, Zeljko Rebraca, and Damon Jones made up the foursome off the bench that Rick Carlisle went to almost exclusively at the beginnings of the 2nd and 4th quarters.

Barry ended his NBA career in March 2006. Post career he has been a NBA analyst on ESPN/ABC.

Secure Jon Barry for Your Event

Based on your interest in Jon Barry as a speaker or for a personal appearance, Direct Sportslink has provided you additional links below for other sports talent with similar appearance fees, speaker topics, and categories that match Jon Barry.