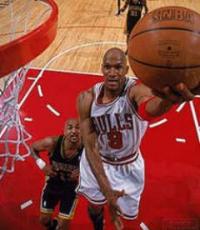 He was a key member of five NBA Championship teams (three with the Chicago Bulls and two with the Los Angeles Lakers)
Fee Range: $5,000 - $10,000
Secure Ron Harper
for Your Event

Allergan was hosting a VIP event at the Palms Hotel Hardwood Suites in Las Vegas, Nevada. Ron shared stories about playing for the great Phil Jackson and with Michael Jordan while playing a game of HORSE with the guests. It was the perfect environment for a successful event.

Harper is a retired NBA player whose career spanned from 1986 to 2001 with four teams in the NBA. He is best known for his play while a member of the Chicago Bulls and Los Angeles Lakers under Head Coach Phil Jackson.

After attending Miami University, he was selected 8th overall by the Cleveland Cavaliers in the 1986 NBA Draft. He averaged 22.9 points per game in his rookie season. After initially spending 3 seasons with the Cavaliers, he would later play for the Los Angeles Clippers, the Chicago Bulls, and Los Angeles Lakers, where he finished his career. He won five championships in his career, three with the Bulls and two with the Lakers.

While a Clipper, a knee injury robbed him of much of his speed and jumping ability though he averaged just under 2 steals per game which still remains a team record. In 1994, he signed a lucrative free agent deal with the Bulls, who were rebuilding following the initial retirement of Michael Jordan. After his first tumultuous season in Chicago, he reinvented himself as a defender and jump shooter. With the return of Jordan in late 1995, Harper remained a key component of the Bulls' perimeter defense and a third scoring option on offense. He became a fan favorite in Chicago. He was a mainstay of Phil Jackson's last five championship teams, following Jackson to Los Angeles to win two more championships.

Secure Ron Harper for Your Event

Based on your interest in Ron Harper as a speaker or for a personal appearance, Direct Sportslink has provided you additional links below for other sports talent with similar appearance fees, speaker topics, and categories that match Ron Harper.