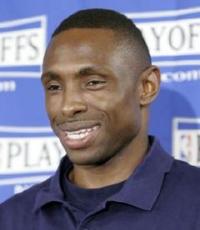 He was a member of the 1999 San Antonio Spurs NBA Championship team; He was named 2006 NBA Coach of the Year
Fee Range: Contact Us
Secure Avery Johnson
for Your Event

Avery Johnson has been both a player and head coach in the NBA. Johnson is known as the "Little General" for his small (by NBA standards) stature (5' 11"), his leadership skills as a point guard and floor general, and his close friendship with former San Antonio Spurs teammate David Robinson.

As a high school senior in 1983, Johnson led New Orleans' St. Augustine High School to a 35-0 record and the Class 4A Louisiana State Championship. Johnson matriculated at New Mexico Junior College before moving on to Cameron University, and finally Southern University, with whom in his senior season in 1988 he led the NCAA with 13.3 assists per game, a senior and all-time record that still stands.

Upon graduation in 1988 Johnson was not selected in the NBA Draft. After a summer season with the USBL's Palm Beach Stingrays, however, Johnson was signed by the Seattle SuperSonics and managed to spend the next 16 years playing in the NBA, including stints with the Denver Nuggets, Houston Rockets, Golden State Warriors, and Dallas Mavericks. A true journeyman as a player, occasionally being traded, or even waived, mid-season, Johnson is most well-known for his time with the San Antonio Spurs (1991, 1992-1993, 1994-2000), particularly his integral role on the 1999 Spurs team that won the NBA championship against the New York Knicks in which he hit the series-clinching shot in Game 5. The San Antonio Spurs retired Avery Johnson's number 6 on December 22, 2007.

Since retiring as a player he has been a head coach in the NBA for various teams including the Dallas Mavericks and New Jersey Nets.

Secure Avery Johnson for Your Event

Based on your interest in Avery Johnson as a speaker or for a personal appearance, Direct Sportslink has provided you additional links below for other sports talent with similar appearance fees, speaker topics, and categories that match Avery Johnson.