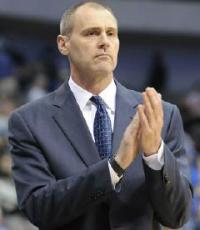 He was the head coach of the 2011 NBA Champion Dallas Mavericks; He is including in a select group of people to ever win a NBA Championship as a player and coach
Fee Range: Contact Us
Secure Rick Carlisle
for Your Event

Coach Rick Carlisle was the head coach of the 2011 NBA Champion Dallas Mavericks.

Carlisle was raised in Lisbon, New York. He graduated from Worcester Academy and played two years of college basketball at the University of Maine from 1979 to 1981, before transferring to the University of Virginia. He co-captained the Cavaliers to the Final Four in 1984 and averaged 12.5 points and 3.3 rebounds per game during his college career.

He was drafted by the Boston Celtics in the first round. After his NBA playing career, Carlisle had several coaching positions with the 2011 Dallas Mavericks NBA Champion team being his most successful.

He has won a NBA championship both as a player (Boston Celtics 1986) and as a coach (Dallas Mavericks 2011).

As a speaker, a Rick Carlisle speaking engagement can include topics such as change, leadership, and building a winning team. He certainly understands what it takes to be a champion and how to get the best out of his team. If you are looking for a keynote or motivational speaker, Rick Carlisle would be speaking from experience and command the attention you want from your audience.

Secure Rick Carlisle for Your Event

Based on your interest in Rick Carlisle as a speaker or for a personal appearance, Direct Sportslink has provided you additional links below for other sports talent with similar appearance fees, speaker topics, and categories that match Rick Carlisle.