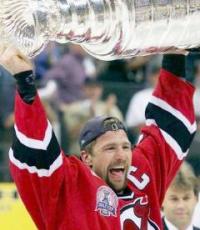 Stevens, born in 1964 is a retired professional ice hockey defenseman who played in the National Hockey League. He was the captain of the New Jersey Devils and is among the NHL's all-time leaders in games played (both in the regular season and in the Stanley Cup playoffs). He is generally regarded as one of the best "stay-at-home" defensemen to ever play in the NHL.

Stevens was drafted by the Washington Capitals in the first round of the 1982 NHL Entry Draft as the fifth overall pick, selected for his offensive abilities and his physical presence on the ice. In his final year of junior hockey, Stevens was voted by the league's coaches as best bodychecker, a harbinger of things to come. He played for nine seasons in D.C. and enjoyed both individual and team success. The Capitals housed one of the strongest defensive corps of the 1980s, and so Stevens was immersed in the defense-first ideology early on in his career.

On July 16, 1990, Scott Stevens was signed as a restricted free-agent by the St. Louis Blues. Because of Stevens' contract status, the Blues were required to compensate the Capitals with five first-round draft picks.  The following year, Stevens signed on to play with the New Jersey Devils.

As captain and leader of the Devils, he won 3 Stanley Cup championships (in 1995, 2000, and 2003). Winner of the Conn Smythe Trophy as the Most Valuable Player in the 2000 playoffs, Stevens announced his retirement on September 6, 2005. The Devils retired his uniform number (#4) in February of 2006, in which he became the first Devils' player to achieve that accomplishment. . He is widely considered to be one of the greatest players in franchise history. Stevens was inducted into the Hockey Hall of Fame in 2007.

Secure Scott Stevens for Your Event

Based on your interest in Scott Stevens as a speaker or for a personal appearance, Direct Sportslink has provided you additional links below for other sports talent with similar appearance fees, speaker topics, and categories that match Scott Stevens.