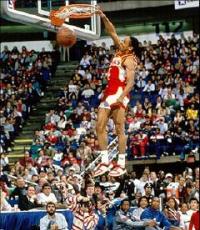 Spud Webb for The Pool Store 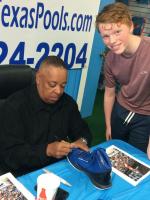 Direct Sportslink worked directly with Spud Webb to secure Spud for The Pool Store's grand opening. Spud signed autographs, took pictures with guests, and was a big hit on site. To secure Spud Webb for any grand opening, appearance, or autograph signing please contact a Direct Sportslink booking agent and we will provide you an immediate fee quote and his availability.

A Spud Webb personal appearance, Spud Webb speaking engagement, or Spud Webb endorsement will reflect well on your company. To hire Spud Webb now for any corporate appearance, fundraiser, motivational speaker event, personal appearance, autograph signing, or website endorsement please contact our celebrity agents at 1-877-6-SPORTS. We will contact Spud Webb or contact Spud Webb's agent and provide you with the booking fees and availability immediately upon your request. Direct Sportslink is the only sports speakers bureau and talent booking agency based in the United States securing only sports talent for corporations, associations, and organizations for motivational speaking engagements, personal appearances, and endorsements. We are the premier sports celebrity booking agency and a sports celebrity procurement expert. Accordingly, we will provide you with any relevant Spud Webb website information and booking agent details so that you can hire Spud Webb for your next event.

Spud Webb was a very quick guard who, despite his height, played 12 seasons in the NBA and became famous for his spectacular ballhandling skills, his jumping ability and his incredible dunks!

Selected by the Detroit Pistons in the 4th round of the 1985 NBA Draft (#87 overall). Webb was given a chance to tryout with the Atlanta Hawks. He ended up staying in Atlanta for several years, until 1996-'97. He has also played for the Sacramento Kings and the Minnesota Timberwolves. In 1997-'98 he returned from Europe and played 4 games for the Orlando Magic.

Spud won the 1986 NBA Slam Dunk Contest. The legend has it that Webb dunked for the first time in his life as a teen, he was still 4-11 (1.50m)! The highlight of his career is his participation and triumph in the 1986 Slam Dunk contest, where he defeated some of the most famous high-flyers of the league, including his teammate Dominique Wilkins.

Since retiring from basketball, Webb has been the President of Basketball Operations for the Texas Legends, the D-League team for the Dallas Mavericks.

Secure Spud Webb for Your Event

Based on your interest in Spud Webb as a speaker or for a personal appearance, Direct Sportslink has provided you additional links below for other sports talent with similar appearance fees, speaker topics, and categories that match Spud Webb.