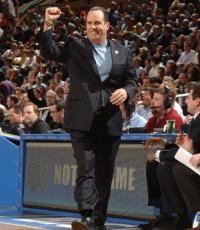 A Mike Brey personal appearance, Mike Brey speaking engagement, or Mike Brey endorsement will reflect well on your company. To hire Mike Brey now for any corporate appearance, fundraiser, motivational speaker event, personal appearance, autograph signing, or website endorsement please contact our celebrity agents at 1-877-6-SPORTS. We will contact Mike Brey or contact Mike Brey's agent and provide you with the booking fees and availability immediately upon your request. Direct Sportslink is the only sports speakers bureau and talent booking agency based in the United States securing only sports talent for corporations, associations, and organizations for motivational speaking engagements, personal appearances, and endorsements. We are the premier sports celebrity booking agency and a sports celebrity procurement expert. Accordingly, we will provide you with any relevant Mike Brey website information and booking agent details so that you can hire Mike Brey for your next event.

After college he returned to his former high school, becoming an assistant coach. In 1987, he was hired by Duke University to assist Mike Krzyzewski, and in 1995 he took over his first head coaching job at the University of Delaware. Brey guided the Fightin' Blue Hens to a 99–51 record over five years, leading the team to two America East Conference Championships and subsequently two trips to the NCAA Tournament.

During the 2007–08 season, Brey led the Irish to a 24–6 regular season mark. He was named the Big East Coach of the Year for the second consecutive season on March 11, 2008. Notre Dame had a 45-game home winning streak between February 2006 and February 2009 - the second longest in school history. By completing the 2007–2008 regular season 18–0 at home, Brey coached the first team in Big East history to have consecutive undefeated seasons at home.

Secure Mike Brey for Your Event

Based on your interest in Mike Brey as a speaker or for a personal appearance, Direct Sportslink has provided you additional links below for other sports talent with similar appearance fees, speaker topics, and categories that match Mike Brey.