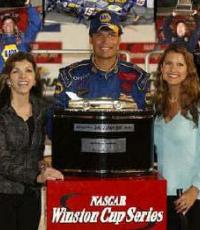 Waltrip's stock-car career got off the ground in 1981, when he captured the Mini-Modified division track championship at Kentucky Motor Speedway. A year later, Waltrip entered the Goody's Dash Series, where he won the series championship in 1983 and was voted the circuit's most popular driver in 1983 and 1984.

Waltrip made his Cup debut in 1985 in the Coca-Cola 600 at Charlotte. He finished 28th in that race and finished 57th in the series standings after just five starts.

In 1986 Waltrip finished second in the Cup rookie of the year race to Alan Kulwicki on the strength of a pair of 11th-place finishes at Martinsville and Pocono. The following season, he posted his first career top-ten finish when he ended up tenth in the spring race at Martinsville Speedway. In 1988, Waltrip began running Busch Series events where he took the checkered flag for the first time at Dover in his fourth start. In 1989, he had his first top-five finish in the #30 Country Time Lemonade Pontiac.

Waltrip was hired by Dale Earnhardt, Inc. in 2000 to drive their new #15 NAPA Chevy entry. In his first race with the team, the 2001 Daytona 500, Waltrip broke a streak of 463 consecutive Cup races without a victory and won his first career points-paying Cup race. The next season, he picked up his second career win at the Pepsi 400 and moved up to fourteenth in the standings. Throughout 2003, he won a career-high two races including his second career Daytona 500 win, and ran in the top-five for most of the season before falling back to 15th in points.

Im 2011, Waltrip won the NextEra Energy Resources 250, making him the 22nd driver to win a race in all three NASCAR national touring series.

Secure Michael Waltrip for Your Event

Based on your interest in Michael Waltrip as a speaker or for a personal appearance, Direct Sportslink has provided you additional links below for other sports talent with similar appearance fees, speaker topics, and categories that match Michael Waltrip.