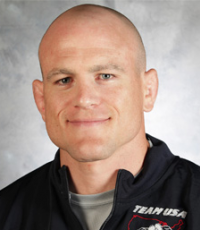 Cael Sanderson began his collegiate wrestling career at Iowa State University in 1997. His freshman year, Sanderson won all 39 matches and the NCAA title, becoming the first freshman to be named the NCAA Wrestling Team Championship’s most outstanding wrestler. In his junior season, Sanderson became the first two-time winner of the Dan Hodge Trophy as the nation’s most outstanding college wrestler. His final college accomplishments were an undefeated record, 4 NCAA titles, 4-time NCAA Outstanding Wrestler, and 4-time Big 12 Conference Champion.

Following graduation, Sanderson became a national freestyle champion in 2001 and won a silver medal in the 2003 World Championship. The following year, he won the gold medal at the 2004 Summer Olympics in Athens.

Sanderson began his coaching career as an assistant coach at his Alma Mater, ISU, in 2004. Three years later he became the head wrestling coach, leading his team to finish second at the NCAA Championship. That same year he was awarded “National Coach of the Year”.  In 2009, he became the head coach at Penn State University, taking them to the Big Ten and NCAA Championship in his second season. Sanderson was later inducted into the Iowa Sports Hall of Fame in 2012.

Secure Cael Sanderson for Your Event

Based on your interest in Cael Sanderson as a speaker or for a personal appearance, Direct Sportslink has provided you additional links below for other sports talent with similar appearance fees, speaker topics, and categories that match Cael Sanderson.