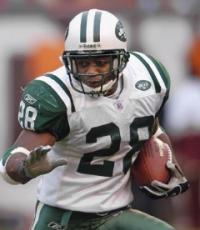 In 1995, Martin entered the NFL as a third round draft pick of the New England Patriots. He won the Offensive Rookie of the Year Award after rushing for 1,487 yards, and was named to the Pro Bowl. The following year, he rushed for a franchise record 166 yards and 3 touchdowns in his first career playoff game against the Pittsburgh Steelers. Martin led The Patriots went to Super Bowl XXXI and was named to the 1996 Pro Bowl squad.

With the Jets, Martin missed only one game and was selected to the Pro Bowl three times. Martin won the NFL rushing title in the 2004 NFL season with 1,697 yards. He also won the FedEx Ground Player of the Year Award in 2004.

Martin rushed for over 1,000 yards in his first 10 professional seasons, a feat previously accomplished only by Barry Sanders. On November 6, 2005, he scored his 100th career touchdown, joining an elite group of only 16 players to do so.

When he retired, Martin was 4th on the all-time rushing yardage list, and on November 27, 2005, he became the 4th running back in NFL history to pass the 14,000-yard rushing mark. He retired as the all-time Jets leader with 10,302 rushing yards with the team. In all, Martin was selected to the Pro Bowl five times during his career. He was elected to the Pro Football Hall of Fame in 2012.

Secure Curtis Martin for Your Event

Based on your interest in Curtis Martin as a speaker or for a personal appearance, Direct Sportslink has provided you additional links below for other sports talent with similar appearance fees, speaker topics, and categories that match Curtis Martin.