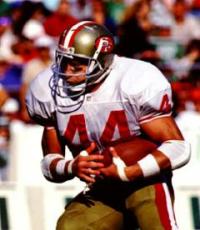 He was a member of two Super Bowl Championship teams while playing for the San Francisco 49ers
Fee Range: $2,000 - $5,000
Secure Tom Rathman
for Your Event

Rathman was a three-year letterwinner in football at the University of Nebraska. He finished his college career with 1,425 rushing yards, and averaged over six yards per carry.

Rathman's professional career spanned nine years. The first seven of those with the San Francisco 49ers. While in San Francisco, he was teamates with another former Nebraska alumnus, Roger Craig, for whom he blocked. Rathman helped lead the 49ers to two Super Bowl Championships, rushing for 38 yards, catching 4 passes for 43 yards, and scoring two touchdowns in Super Bowl XXIV. In 1989, he led all NFL running backs in receiving with 73 receptions for 616 yards. He spent his last season with the Los Angeles Raiders.

After his playing career finished Rathman joined the 49ers coaching staff from 1997-2002. In 2003 he followed coach Steve Mariucci to the Detroit Lions where he was running backs coach during Mariucci's tenure with the Lions. Rathman rejoined the 49ers as the team’s running backs coach in 2009 after serving the previous two seasons in the same capacity with the Oakland Raiders.

Secure Tom Rathman for Your Event

Based on your interest in Tom Rathman as a speaker or for a personal appearance, Direct Sportslink has provided you additional links below for other sports talent with similar appearance fees, speaker topics, and categories that match Tom Rathman.