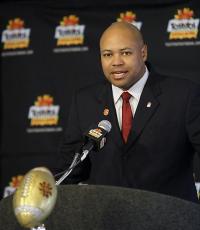 Shaw attended Stanford University, where he played college football as a wide receiver. Shaw was also on the Stanford men's basketball and track teams while at the university before earning a B.A. in sociology in 1995. His coaching career began at Western Washington University in 1995. In 1997, Shaw began a nine-year run as an NFL assistant coach with stints for the Philadelphia Eagles, Oakland Raiders, and Baltimore Ravens. As the Raiders' quality control from 1998–2000 and quarterbacks coach in 2001, the team won two consecutive AFC West titles and completed a 10–6 regular season.

Shaw was the quarterbacks coach for the Baltimore Ravens from 2002–2004 and wide receivers coach for the Ravens from 2002–2005, with the 2003 team finishing with a 10–6 regular season mark and winning the AFC North. In 2006, Shaw left the NFL for the University of San Diego as the passing game coordinator. The 11–1 Toreros' offense led the NCAA Division I-AA in many statistical categories, including passing offense (293.3 ypg), total offense (494.25 ypg), and scoring offense (42.83 ppg).

When Jim Harbaugh was hired as head coach of Shaw's alma mater, Stanford, in 2007, he brought Shaw as offensive coordinator. During his years as an assistant coach, Shaw also coached the Cardinal wide receivers and running backs. Shaw's unit performed successfully during his years as coordinator. During Stanford's 2010 season when Shaw took over as running backs coach, the Cardinal running game was second in the conference and 17th in the nation with an average of 213.77 yards and a total of 2,779 yards, Stanford's second-highest rushing total ever.

In January 2011, Shaw was promoted to head coach after Harbaugh left to become head coach of the NFL's San Francisco 49ers. He led his team to a 2011-12 BCS Bowl.

Secure David Shaw for Your Event

Based on your interest in David Shaw as a speaker or for a personal appearance, Direct Sportslink has provided you additional links below for other sports talent with similar appearance fees, speaker topics, and categories that match David Shaw.