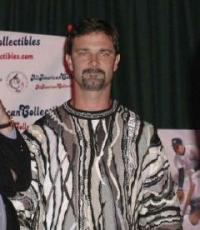 Mattingly (nicknamed "Donnie Baseball" and "The Hit Man"), was a star first baseman for the New York Yankees of the American League from 1982-1995.

In 1984, he became the Yankees' full time first baseman, and was an MVP candidate. He hit .343 and beat out teammate Dave Winfield for the American League batting title by getting 4 hits in 5 at-bats on the last day of the season, while slugging a league-leading 44 doubles to go with 23 home runs and 110 RBI.

He followed that up with a spectacular 1985 season, winning the MVP award in the American League; he batted .324 with 35 home runs and 145 RBI, then the most RBI in a season by a major league batter since Ted Williams hit 159 in 1949. He may have been even better in 1986, when he hit .352 with a league-leading 238 hits and 53 doubles. However, he was beat out in the American League MVP voting by pitcher Roger Clemens, who also won the Cy Young Award that year.

Mattingly remained among the game's best first basemen throughout the 1980s, winning the Gold Glove Award for his fielding and a spot on the American League All-Star team each year in the mid to late 1980s.

Mattingly finished his career with 2,153 hits, 222 home runs, 1,099 RBI and a .307 lifetime average, but never winning or playing in a World Series. Most baseball fans and experts agree that he is the best Yankee player to have never played in a World Series with the team. The Yankees retired his number 23 and dedicated his plaque for Monument Park at Yankee Stadium on August 31, 1997.

Secure Don Mattingly for Your Event

Based on your interest in Don Mattingly as a speaker or for a personal appearance, Direct Sportslink has provided you additional links below for other sports talent with similar appearance fees, speaker topics, and categories that match Don Mattingly.