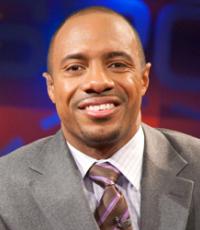 Jay Williams grew up in New Jersey and attended St. Joseph High School in Metuchen. After a stellar high school basketball career, Williams attended Duke University where he became one of the few freshmen in school history to average double figures in scoring and was named ACC Rookie of the Year and National Freshman of the Year by The Sporting News. The next season Williams started all 39 games and led the Devils to the 2001 NCAA National Championship, earning NABC Player of the Year honors. He left Duke scoring 2,079 points, good for sixth all-time, and his jersey number 22 retired at Senior Day.

On the night of June 19, 2003, Williams crashed his motorcycle and the injury was career ending. He never played another game in the NBA. Since his NBA playing days, Williams has spent much of his time as a college basketball analyst.

Secure Jay Williams for Your Event

Based on your interest in Jay Williams as a speaker or for a personal appearance, Direct Sportslink has provided you additional links below for other sports talent with similar appearance fees, speaker topics, and categories that match Jay Williams.