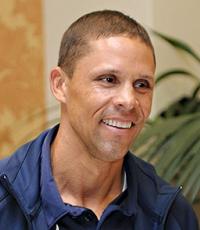 O'Brien is one of the best decathlon athletes of the 1990s.

He grew up as an adopted child in an Irish-American family in Oregon. His athleticism was clear, in high school winning four state track titles his senior year and making all-state in football and basketball. He is an alumnus of the University of Idaho, where he competed in track and field, although not in the decathlon. His name is attached to the university's outdoor track and field venue, where he quietly trained for his Olympic and world championships under the aid of Idaho's track coach, Michael W. Keller.

He won an Olympic gold medal for decathlon in the 1996 Summer Olympics.

Many don't know that O'Brien also broke the world record for the fastest game of hopscotch on Chelsea Piers on May 7, 2009. He established a record of 1 minute and 21 seconds, breaking the old mark by two seconds.

On June 1st 2012, O'Brien released a book, "Clearing Hurdles: The Quest to Be The World's Greatest Athlete."

Secure Dan O'Brien for Your Event

Based on your interest in Dan O'Brien as a speaker or for a personal appearance, Direct Sportslink has provided you additional links below for other sports talent with similar appearance fees, speaker topics, and categories that match Dan O'Brien.