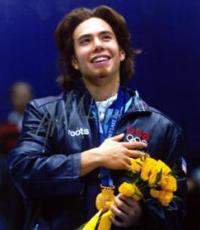 An eight time Olympic medalist, he is one of the most decorated and popular U.S. Winter Olympians
Fee Range: Contact Us
Secure Apolo Anton Ohno
for Your Event

Ohno was born in Seattle, Washington to Jerrie Lee and Japanese Yuki Ohno). When Apolo was 14 years old (1997), he became U.S Champion, the youngest ever. A year before, he had appeared in Sports Illustrated for Kids as a "Hotshot."  In the 2002 Salt Lake City Olympics Ohno won the gold medal in the 1500-meter race as well as the silver medal in the 1000-meter race.

Since gaining recognition through his sport, Ohno has worked as a motivational speaker, philanthropist, started a nutritional supplement business called 8 Zone, and won the reality TV show Dancing with the Stars.

Based on your interest in Apolo Anton Ohno as a speaker or for a personal appearance, Direct Sportslink has provided you additional links below for other sports talent with similar appearance fees, speaker topics, and categories that match Apolo Anton Ohno.