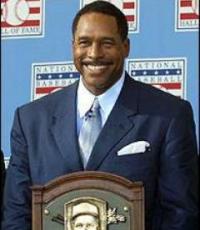 He is a member of the Pro Baseball Hall of Fame; He is the second man ever drafted in three different pro sports
Fee Range: $20,000 - $30,000
Secure Dave Winfield
for Your Event 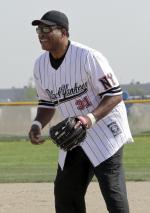 Direct Sportslink secured Dave Winfield for his participation in the Grand Slam Celebrity Softball game in Canada. Dave participated in the draft party and after party before playing in the celebrity softball event. The event included several other major league baseball legends who raised money for the sponsors. To secure Dave Winfield for any personal appearance, speaking engagement or meet and greet please contact a Direct Sportslink booking agent for his availability and immediate fee quote.

Winfield was one of the best players in Major League Baseball for two decades.

He was a two sport star in both basketball and baseball for the Minnesota Golden Gophers. After hitting and pitching the Gophers to the College World Series in 1973, he was drafted by the San Diego Padres, the Minnesota Vikings despite not playing college football, the Atlanta Hawks, and the Utah Stars of the ABA. He is one of only two men ever drafted in three different pro sports.

Winfield chose baseball, and gained another distinction when the Padres promoted him directly to the majors. This is a rare move in modern baseball, making him one of a select few players since the origins of the amateur draft in 1965 to make the leap straight to Major League Baseball without playing in the minor leagues first. He proved up to the task, batting .277 in 56 games.

He burst into stardom in 1979, when he batted .308 with 34 home runs and 118 RBI, then played one more season with the Padres before becoming a free agent.

In 1981, New York Yankees owner George Steinbrenner made headlines by signing Winfield to a 10-year, $23 million contract, making him the game's highest-paid player. Winfield was one of the best players in the game throughout the life of the contract.

Winfield retired in 1995 and was elected to the Baseball Hall of Fame in 2001, in his first year of eligibility. In 2009, Winfield joined ESPN as an analyst on Baseball Tonight.

Secure Dave Winfield for Your Event

Based on your interest in Dave Winfield as a speaker or for a personal appearance, Direct Sportslink has provided you additional links below for other sports talent with similar appearance fees, speaker topics, and categories that match Dave Winfield.