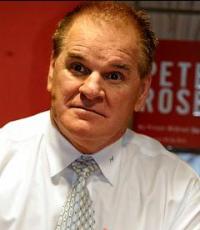 The Ohio Justicy and Policy Center was seeking a sports celebrity speaker who could relate to "Second Chances." Pete was candid about the mistakes he made during and after baseball and talked about the importance of second chances. It was a heartfelt speech that drew numerous questions from the audience. The room was sold out!

A Pete Rose personal appearance, Pete Rose speaking engagement, or Pete Rose endorsement will reflect well on your company. To hire Pete Rose now for any corporate appearance, fundraiser, motivational speaker event, personal appearance, autograph signing, or website endorsement please contact our celebrity agents at 1-877-6-SPORTS. We will contact Pete Rose or contact Pete Rose's agent and provide you with the booking fees and availability immediately upon your request. Direct Sportslink is the only sports speakers bureau and talent booking agency based in the United States securing only sports talent for corporations, associations, and organizations for motivational speaking engagements, personal appearances, and endorsements. We are the premier sports celebrity booking agency and a sports celebrity procurement expert. Accordingly, we will provide you with any relevant Pete Rose website information and booking agent details so that you can hire Pete Rose for your next event.

Pete Rose, Sr., nicknamed "Charlie Hustle", is a former player and manager in Major League Baseball. Rose played from 1963 to 1986, best known for his many years with the Cincinnati Reds. Rose, a switch hitter, is the all-time Major League leader in hits (4,256), games played (3,562), at bats (14,053), and outs (10,328). He won three World Series rings, three batting titles, one Most Valuable Player Award, two Gold Gloves, the Rookie of the Year Award, and made 17 All-Star appearances at an unequaled five different positions (2B, LF, RF, 3B, and 1B). Rose's nickname, "Charlie Hustle", was given to him for his play beyond the "call of duty" while on the field. Even when being walked, Rose would run to first base, instead of the traditional walk to base. Rose was also known for sliding headfirst into a base, his signature move.

In August 1989, three years after he retired as an active player, Rose agreed to permanent ineligibility from baseball amidst accusations that he gambled on baseball games while playing for and managing the Reds; some accusations claimed that he bet on, and even against, the Reds. After years of public denial, in 2004, he admitted to betting on, but not against, the Reds. After Rose's ban was instated, the Baseball Hall of Fame formally voted to ban those on the "permanently ineligible" list from induction. Previously, those who were banned (most notably, Shoeless Joe Jackson) had been excluded by informal agreement among voters. The issue of his possible re-instatement and election to the Hall of Fame remains a contentious one throughout baseball.

Since retiring, Pete has lived in California and Nevada and been active with autograph signings and personal appearances. Please see the above testimonial from Direct Sportslink's speaking engagement booking with Pete Rose as the keynote speaker for OJPC.

Secure Pete Rose for Your Event

Based on your interest in Pete Rose as a speaker or for a personal appearance, Direct Sportslink has provided you additional links below for other sports talent with similar appearance fees, speaker topics, and categories that match Pete Rose.