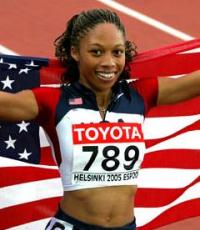 Allyson began running in her first year of high-school, after being inspired by her brother's efforts in track and field, and hasn't looked back since.

The following are some "did you knows?" about Allyson:

Secure Allyson Felix for Your Event

Based on your interest in Allyson Felix as a speaker or for a personal appearance, Direct Sportslink has provided you additional links below for other sports talent with similar appearance fees, speaker topics, and categories that match Allyson Felix.