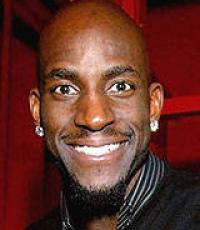 He was a part of the 2008 NBA Champion Boston Celtics; He was named the NBA's MVP in 2004
Fee Range: Contact Us
Secure Kevin Garnett
for Your Event

In high school, Garnett was a 1995 McDonald's All-American at Farragut Career Academy and won a national player of the year award. Garnett entered the 1995 NBA Draft, where he was selected with the 5th overall pick by the Minnesota Timberwolves and became the first NBA player drafted directly out of high school in 20 years.

In the 2000 Olympics, Garnett helped lead team USA to the gold medal. He has been nicknamed "The Big TIcket" and was formerly called "The Franchise."

Garnett made an immediate impact with the Minnesota Timberwolves leading them to eight-consecutive playoff appearances. In 2004, Garnett led the Timberwolves to the Western Conference Finals and was voted Most Valuable Player (MVP) in the 2003–04 season. Since his second season in the NBA, Garnett has been named to numerous All-Star Games and All-Defensive First Teams and won the All-Star MVP award in 2003. He was awarded the regular season's NBA Defensive Player of the Year in the 2007–08 season.

After spending 12 seasons with the Minnesota Timberwolves, Garnett was traded to the Boston Celtics in a blockbuster trade in 2007. In his first year with the Celtics, he helped lead them to their first NBA championship since 1986 along with Ray Allen, Rajon Rondo, and Paul Pierce. They were coached by Doc Rivers and the GM was Danny Ainge.

On June 30, 2012, Garnett signed a three year extension to stay with the Celtics. He was traded to the Brooklyn Nets in 2013.

Secure Kevin Garnett for Your Event

Based on your interest in Kevin Garnett as a speaker or for a personal appearance, Direct Sportslink has provided you additional links below for other sports talent with similar appearance fees, speaker topics, and categories that match Kevin Garnett.