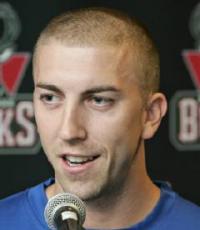 Blake attended Miami High School, before coming to Maryland.  Blake was Maryland's starter the first day of his freshman year and was the first ACC player to compile 1,000 points, 800 assists, 400 rebounds and 200 steals. Widely known for his superb passing ability, he helped lead the Terrapins to a Final Four appearance (2001) and the 2002 NCAA championship. Blake was not known for his scoring, but did average eleven points per game in his senior year. He consistently averaged over six assists per game in each of his four years, including averages of 7.9 and 7.1 in 2002 and 2003, respectively.

In September 2005, Blake was offered a contract by the Portland Trail Blazers, which the Wizards declined to match. This became the second reunion with former Maryland Terrapin and Washington Wizards backcourt teammate Juan Dixon, who also signed with the Trail Blazers in the 2005 off-season. 2008-2009 was one of Blake's best statistical seasons while also helping the Trail Blazers reach the NBA Playoffs. He played an important part in the Los Angeles Lakers first round victory over the Denver Nuggets in the 2012 NBA Playoffs.

Secure Steve Blake for Your Event

Based on your interest in Steve Blake as a speaker or for a personal appearance, Direct Sportslink has provided you additional links below for other sports talent with similar appearance fees, speaker topics, and categories that match Steve Blake.