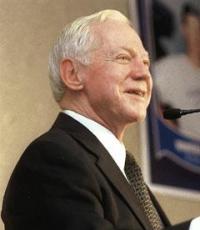 He is a member of the Baseball Hall of Fame; When he retired, he held six World Series pitching records
Fee Range: $10,000 - $20,000
Secure Whitey Ford
for Your Event

Whitey, specialized in the curve ball and, as he later admitted, a trick pitch that involved cutting the ball to give it an unusual break.  He was a high-percentage winner who specialized in big games.

He joined the Yankees during the 1950 season, won 9 consecutive games down the stretch, and beat the Philadelphia Phillies in the deciding fourth game of the World Series.

Secure Whitey Ford for Your Event

Based on your interest in Whitey Ford as a speaker or for a personal appearance, Direct Sportslink has provided you additional links below for other sports talent with similar appearance fees, speaker topics, and categories that match Whitey Ford.