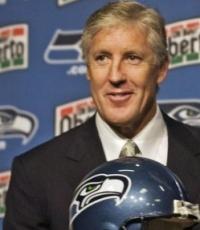 He is the head football coach of the Seattle Seahawks; Before Seattle, he led the University of Southern California to win two National Championships and helped restore the USC football tradition
Fee Range: $50,000 - $75,000
Secure Pete Carroll
for Your Event

Edwards Lifesciences was looking to secure a motivational sports speaker who could talk specifically about being number one and the challenges associated with being the best. Carroll delivered right on point, talking about what it takes to stay on top, how he approches each day and the competition. Please read the testimonial below for more information on the event.

Coach Pete Carroll was an outstanding speaker who was perfect for our audience. A big thank you to Direct Sportslink for helping us secure Coach Carroll and working with us from start to finish, including your presence on-site, to make sure our event was a huge success.

He was named the Trojans' head football coach on December 15, 2000, signing a 5-year contract. His team won a school record 34 straight games from 2003-2005, a streak that started after a triple-overtime loss to California and ended with the 2006 Rose Bowl. During his tenure, USC has broken its average home attendance record four times in a row, without any stadium expansions; the USC home attendance average in his first season, 2001, was 57,744 and in 2006 was over 91,000.

Secure Pete Carroll for Your Event

Based on your interest in Pete Carroll as a speaker or for a personal appearance, Direct Sportslink has provided you additional links below for other sports talent with similar appearance fees, speaker topics, and categories that match Pete Carroll.