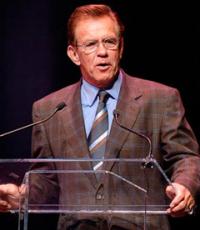 As a player he was a member of two World Series Champion St. Louis Cardinals teams; As a broadcaster he has won three Emmy Awards
Fee Range: $20,000 - $30,000
Secure Tim McCarver
for Your Event

Tim McCarver's greatest playing success came with the St. Louis Cardinals. In 1966, he named to the all star team. In 1967, he finished second to teammate Orlando Cepeda for the National League Most Valuable Player award. He was a member of two World Series championships during his time in St. Louis, and fostered a relationship with young pitcher Steve Carlton that would keep him in the major leagues later in his career.

McCarver finished his career as the personal catcher for Steve Carlton for the Phllies in the late 1970s. He retired after the 1979 season to begin a broadcasting career. McCarver briefly returned to duty in September 1980 so he could play in four different decades.

As a broadcaster, McCarver has enjoyed prominence as a color commentator on the network level. He has won multiple Emmy Awards for Sports Event Analyst.

Based on your interest in Tim McCarver speaker fee information, we have provided you other popular St. Louis Cardinals appearance fees and players who played with Tim during his career. They include: Bob Gibson, Lou Brock, Pete Rose, and Joe Morgan.

Secure Tim McCarver for Your Event

Based on your interest in Tim McCarver as a speaker or for a personal appearance, Direct Sportslink has provided you additional links below for other sports talent with similar appearance fees, speaker topics, and categories that match Tim McCarver.