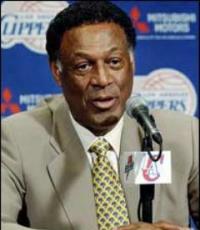 He is a member of both The Naismith Memorial Basketball Hall of Fame and The NBA Hall of Fame
Fee Range: $10,000 - $20,000
Secure Elgin Baylor
for Your Event

Had Elgin Baylor been born 25 years later, his acrobatic moves would have been captured on video, his name emblazoned on sneakers, and his face plastered on cereal boxes. But he played before the days of widespread television exposure, so among the only records of his prowess that remain are the words of those who saw one of the greatest ever to play.

An offensive force, Baylor averaged 27.4 points per game in his 14-year career. "He was one of the most spectacular shooters the game has ever known," Baylor's longtime teammate Jerry West told HOOP magazine in 1992. "I hear people talking about forwards today and I haven't seen many that can compare with him."

In April 1986, the Los Angeles Clippers hired Baylor to serve as the team's vice president of basketball operations, a position he held for over 20 years.

Elgin Baylor was not only one of the all-time great NBA players but since he also held a front office NBA job for many years allows him the ability to speak about his playing days and business topics that will be sure to capture the attention of your audience.

made many NBA All-Star appearances on the court and has made many personal appearances off the court, such as autograph signing shows, trade shows, and corporate events. He is a true legend of the game and the interest shown by fans in his appearances is an indication of his popularity.  Elgin Baylor's appearance fee is located above.

has been successful on and off the court and represents the best of the NBA with his professionalism. His endorsement would connect your product or company with one of the most respected athletes to ever play professional basketball.

Secure Elgin Baylor for Your Event

Based on your interest in Elgin Baylor as a speaker or for a personal appearance, Direct Sportslink has provided you additional links below for other sports talent with similar appearance fees, speaker topics, and categories that match Elgin Baylor.