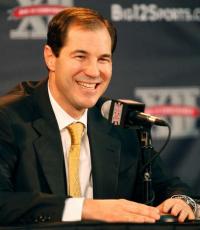 He is the Head Men's Basketball Coach of the Baylor University Bears
Fee Range: $10,000 - $20,000
Secure Scott Drew
for Your Event

Drew graduated from Butler University in 1993 with a bachelor's degree in liberal arts. During his time at Butler, he spent two years as a student assistant for men's basketball team. Afterwards, Drew assumed an assistant coaching position with the Valparaiso University Crusaders. He spent nine years in this position, during which he earned a master's degree from Valparaiso and a reputation as one of the best recruiters in the nation. Once his father retired from coaching Valparaiso, Drew became the team's head coach for one year.

In 2003, Drew took the head coaching position of the men's team at Baylor University. In the 2007–08 season, Drew turned around his Bears to finish with a 21–9 regular season record and 9–7 Big 12 record, and rank 4th in the Big 12. The 21 wins and 9 conference wins were Baylor's best since joining the Big 12 in 1996. It was enough to make the NCAA Tournament for only the fifth time in school history and the first time since 1988. After the season, Drew signed a 10 year contract extension to stay the head coach of the Bears.

In 2010, after finishing tied for second in the Big 12 with a squad picked to finish tenth in the preseason poll, Scott Drew was elected the Austin American Statesman's Coach of the Year award. That year he went on to beat the Texas Longhorns three straight times. He went on in the same year to enjoy a NCAA sweet 16 birth making he and his father Homer Drew one of the few father and son coaches to accomplish such feat. Then he went one step further and made an Elite 8 appearance eventually losing to the national championship winning Duke Blue Devils.

In 2011, Drew led Baylor to a 18–13 overall record and an seventh-place finish in the Big 12. In the first round of the Big 12 Conference Tournament, Baylor lost to the 14–17 Oklahoma Sooners 84–67. Baylor was expected to be even more improved in 2011–12. The Bears didn't disappoint, starting the season 17–0 and rising to third in the AP Poll and the coaches' poll—the highest weekly rankings in school history.  Finishing the season 30-8, Baylor advanced all the way to the Elite 8.

Secure Scott Drew for Your Event

Based on your interest in Scott Drew as a speaker or for a personal appearance, Direct Sportslink has provided you additional links below for other sports talent with similar appearance fees, speaker topics, and categories that match Scott Drew.