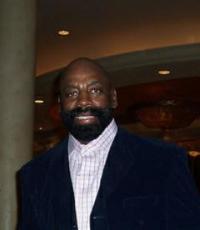 He was a key member of the Dallas Cowboys 1978 Super Bowl Champion team; He is one of only three Dallas Cowboy players to have played for the franchise for 15+ years
Fee Range: Contact Us
Secure Ed "Too Tall" Jones
for Your Event

Ed "Too Tall" Jones for Van-Heusen

Van Heusen was looking to secure one of the top "Fan's Choice" for the Pro Football Hall of Fame and worked directly with Direct Sportslink to secure Ed "Too Tall" Jones appearance for their media tour. His presence provided Van-Heusen the star power they needed to effectively communicate the brand's sponsorship of the Pro Football Hall of Fame. Direct Sportslink designed Ed "Too Tall" Jones' official website and has secured Ed for numerous appearances, speaking engagements, and autograph signings on behalf of corporate clients.

Ed Lee "Too Tall" Jones was given the nickname "Too Tall" due to his height, an impressive 6'10", tall even by modern football player standards. During the 1970's, he was extremely above average height for a football player; neither of his parents were above six feet in height.

He graduated from the Merry High School in Jackson and attended Tennessee State University. Jones was the number one draft choice of the NFL in 1974.

Jones played defensive end for the Dallas Cowboys from 1974 through 1978, attempted a professional boxing career winning all of his bouts in 1979, and returned to Dallas to play for the Cowboys from 1980 through 1989. He was named All Pro in 1981 and 1982, and played in 16 playoff games, including three Super Bowls. Jones played on three NFC champion teams and the 1978 Super Bowl winner. He retired in 1989 after 15 seasons with the Dallas Cowboys (though he retired earlier for one season to pursue a short-lived boxing career, then returned).

Jones, Bill Bates, and Mark Tuinei are the only players in Cowboys history to play for the franchise for 15 seasons.

Secure Ed "Too Tall" Jones for Your Event