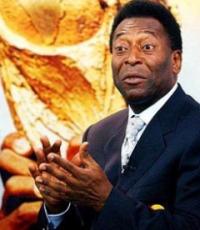 He is a world renowned former soccer player who is hailed as a national hero in his native Brazil
Fee Range: Above $100,000
Secure Pele
for Your Event

A Pele personal appearance, Pele speaking engagement, or Pele endorsement will reflect well on your company. To hire Pele now for any corporate appearance, fundraiser, motivational speaker event, personal appearance, autograph signing, or website endorsement please contact our celebrity agents at 1-877-6-SPORTS. We will contact Pele or contact Pele's agent and provide you with the booking fees and availability immediately upon your request. Direct Sportslink is the only sports speakers bureau and talent booking agency based in the United States securing only sports talent for corporations, associations, and organizations for motivational speaking engagements, personal appearances, and endorsements. We are the premier sports celebrity booking agency and a sports celebrity procurement expert. Accordingly, we will provide you with any relevant Pele website information and booking agent details so that you can hire Pele for your next event.

In his native Brazil, Pelé is hailed as a national hero. He is known for his accomplishments and contributions to the game of football in addition to being officially declared the football ambassador of the world by FIFA and a national treasure by the Brazilian government.

Pele is also acknowledged for his vocal support of policies to improve the social conditions of the poor. When Pele scored his 1,000th goal he dedicated it to the poor children of Brazil. During his career, he became known as "The King of Football," "The King Pelé,"or simply "The King." He is also a member of the American National Soccer Hall of Fame.

Spotted by football star Waldemar de Brito, Pelé began playing for Santos Futebol Clube at 15 and his national team at 16, and won his first World Cup at 17.

Pelé's technique and natural athleticism have been universally praised; he was renowned for his excellent dribbling and passing, his pace, powerful shot, exceptional heading ability, and prolific goalscoring.

He is the all-time top scorer in the history of the Brazil national football team and is the only footballer to be a part of three World Cup-winning teams. In 1962 he was part of the Brazilian squad. In November 2007, FIFA announced that he would be awarded the 1962 medal retroactively, making him the only player in the world to have three World Cup winning medals.

Since his full retirement in 1977, Pelé has been an ambassador for football and has also undertaken various acting roles and commercial ventures.

Secure Pele for Your Event

Based on your interest in Pele as a speaker or for a personal appearance, Direct Sportslink has provided you additional links below for other sports talent with similar appearance fees, speaker topics, and categories that match Pele.