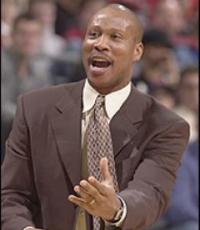 He won three NBA titles as a player with the Los Angeles Lakers; As a head coach, he led the New Jersey Nets to two NBA Finals
Fee Range: $20,000 - $30,000
Secure Byron Scott
for Your Event

After retiring from professional basketball, Scott began coaching as an assitant with the Sacramento Kings.  In 2000, Scott took over the head coaching position for the New Jersey Nets where he lead them to two NBA finals in four years.  He then became the head coach for the New Orleans Hornets for the next five years.  In 2010, the Cleveland Cavaliers hired Scott as the head coach, a job he kept for three years.

Secure Byron Scott for Your Event

Based on your interest in Byron Scott as a speaker or for a personal appearance, Direct Sportslink has provided you additional links below for other sports talent with similar appearance fees, speaker topics, and categories that match Byron Scott.