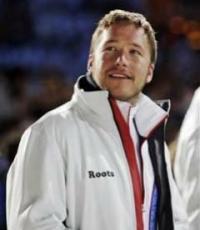 He is one of the most accomplished American male skiers
Fee Range: Contact Us
Secure Bode Miller
for Your Event

Bode Miller is an Olympic and World Championship gold medalist, a two-time overall World Cup champion in 2005 and 2008, and can therefore be considered the most successful male American alpine ski racer of all time (with only Lindsey Vonn surpassing him). Miller is also considered one of the greatest World Cup racers of all time with over 30 victories.

In 2008, Miller and Lindsey Vonn won the overall World Cup titles for the first U.S. sweep in 25 years.

As of 2013, he had won five medals in the Winter Olympics, the most of any U.S. skier − two silvers (giant slalom and combined) in Salt Lake City 2002, and a gold (super combined), a silver (Super G) and a bronze (downhill) in Vancouver 2010. As of 2013, Miller was one of five skiers who have won Olympic medals in four different disciplines, matching the feats of Kjetil André Aamodt and female racers Anja Pärson, Janica Kostelić, and Katja Seizinger.

Secure Bode Miller for Your Event

Based on your interest in Bode Miller as a speaker or for a personal appearance, Direct Sportslink has provided you additional links below for other sports talent with similar appearance fees, speaker topics, and categories that match Bode Miller.