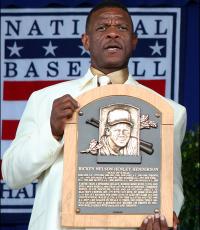 He was a ten time All Star, two time World Series Champion, and three time Silver Slugger; He was inducted into the Baseball Hall of Fame in 2009
Fee Range: $5,000 - $10,000
Secure Rickey Henderson
for Your Event

Henderson played for nine teams from 1979 to 2003, including four stints with his original team, the Oakland Athletics. Nicknamed The Man of Steal, he has been widely regarded as the sport's greatest leadoff hitter and baserunner. At the time of his last major league game in 2003, the ten-time American League All-Star ranked among the sport's top 100 all-time home run hitters and was its all-time leader in bases on balls. In 2009, he was inducted to the Baseball Hall of Fame on his first ballot appearance.

In addition to the career steals record, Henderson held the single-season record for stolen bases (130 in 1982) and is the first player in AL history to steal 100 bases in a season, having done so three times. He was among the league's top ten base stealers in 21 different seasons.

Henderson was named the AL's Most Valuable Player in 1990, and he was the leadoff hitter for two World Series champions: the 1989 Oakland A's and the 1993 Toronto Blue Jays. A 12-time stolen base champion, Henderson led the league in runs five times. His 25-year career elevated Henderson to the top ten in several other categories, including career at bats, games, and outfield putouts and total chances. His high on-base percentage, power hitting, and stolen base and run totals made him one of the most dynamic players of his era. He was further known for his unquenchable passion for playing baseball and a buoyant, eccentric and quotable personality that both perplexed and entertained fans.

Once asked if he thought Henderson was a future Hall of Famer, statistician Bill James replied, "If you could split him in two, you'd have two Hall of Famers." Henderson officially retired on July 13, 2007. His number 24 jersey was retired by the Athletics in 2009. Henderson has been a special instructor and first base coach for the Mets and Athletics.

Secure Rickey Henderson for Your Event

Based on your interest in Rickey Henderson as a speaker or for a personal appearance, Direct Sportslink has provided you additional links below for other sports talent with similar appearance fees, speaker topics, and categories that match Rickey Henderson.