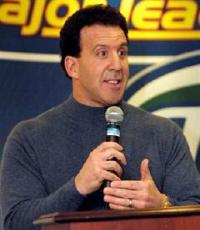 He is a world renowned fitness expert; He is the Founder of Major League Lacrosse
Fee Range: Contact Us
Secure Jake (Body by Jake) Steinfeld
for Your Event

Jake is a tried and true fitness authority, who is known for his exceptional motivational abilities and his instinctive talent of making the task of keeping fit seem simple and fun. Growing up in Long Island, New York, Jake was an overweight kid who had a terrible stutter. It was overcoming these adversities that entrenched his new philosophy of living a fit lifestyle, adopting his personal lifelong motto "Don't Quit!".

Jake created the industry of personal fitness training and was the first nationally recognized fitness trainer. He was featured in newspapers, magazines and was the "coffee talk" of Beverly Hills Cafes.

Jake has always made his passions his business, first fitness and then lacrosse. Like most lacrosse fans and players, he always kept his love for the game. Fortunately for him and young men today who want to play lacrosse professionally, Jake's success has allowed him to make his dream a reality with the creation of Major League Lacrosse (MLL). After three years of tireless planning, June 7, 2001, marked the inaugural season of professional outdoor lacrosse. MLL has now completed five successful seasons and is poised to begin the sixth in the Spring of 2006 with a new west coast expansion.

In November 2005, California Govenor Arnold Schwarzenegger named Jake to chair the California Governor's Council on Physical Fitness and Sports. Jake has joined forces with other sports celebrities and legends that have been assembled to shine a light on the remarkable things everyday Californians are doing to promote physical activity in their schools and communities.  Govenor Schwarzenegger recognized Jake as a worldwide icon in the fitness industry and realized his energy and ?don't-quit' attitude will be an inspiration for all Californians.

Secure Jake (Body by Jake) Steinfeld for Your Event