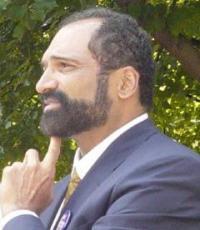 He is a member of the Pro Football Hall of Fame; He played on four winning Super Bowl teams with the Pittsburgh Steelers; He was Super Bowl IX MVP
Fee Range: $30,000 - $40,000
Secure Franco Harris
for Your Event

Harris attended Penn State University and was the blocking back for future Pro Bowl running back Lydell Mitchell. In the 1972 draft he was chosen by the Pittsburgh Steelers in the first round, the 13th selection overall. He played his first 12 years in the NFL with the Steelers; his 13th and final year (1984) was spent with the Seattle Seahawks.

In his first season with the Steelers (1972), Harris was named the league's rookie of the year by both The Sporting News and United Press International. In that season he gained 1,055 yards on 188 carries, with a 5.6 yards per carry average. He also rushed for 10 touchdowns and caught 3 touchdown passes. He was extremely popular with Pittsburgh's large Italian-American population: his fans dubbing themselves "Franco's Italian Army."

Harris was the key to one of the most famous plays in football, the Immaculate Reception, so dubbed by Pittsburgh sportscaster Myron Cope. In a 1972 playoff game, the Oakland Raiders were leading the Steelers by 7-6 with 22 seconds to play when a Terry Bradshaw pass was deflected -- off of Raiders defensive back Jack Tatum, the officials ruled. Harris snatched the ball just before it hit the ground and ran it in to win the game.

Harris has spent much of his post football career owning various food businesses.

Secure Franco Harris for Your Event

Based on your interest in Franco Harris as a speaker or for a personal appearance, Direct Sportslink has provided you additional links below for other sports talent with similar appearance fees, speaker topics, and categories that match Franco Harris.