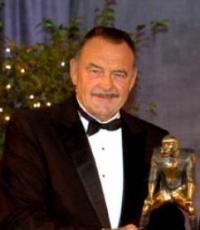 He is a member of the Pro Football Hall of Fame and lengendary middle linebacker for the Chicago Bears
Fee Range: $20,000 - $30,000
Secure Dick Butkus
for Your Event

The Chicago Bears have often had one player who symbolized the team, usually a defensive player or a bruising fullback. Middle linebacker Dick Butkus was that player for 9 seasons, from 1965 through 1973.

Butkus grew up in Chicago and decided as a youngster that he wanted to be a professional football player. He did it without moving far from his home town. A consensus All-American as a center and linebacker at the University of Illinois in 1963 and 1964, he joined the Bears the following season and won the starting linebacker job from a perennial All-Pro, Bill George.

At 6-foot-3 and 245 pounds, Butkus was mobile enough to cover backs on pass patterns and to cover virtually the entire width of the field on running plays. He was an All-Pro seven times and played in eight Pro Bowls.

A knee injury in 1970 slowed him somewhat, but he continued to star for the Bears until the knee was re-injured in 1973, forcing his retirement. During his NFL career, he intercepted 22 passes, returning them for 166 yards, and recovered 25 fumbles, including 1 for his only NFL touchdown.

Secure Dick Butkus for Your Event

Based on your interest in Dick Butkus as a speaker or for a personal appearance, Direct Sportslink has provided you additional links below for other sports talent with similar appearance fees, speaker topics, and categories that match Dick Butkus.