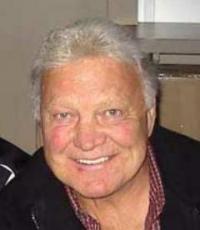 He is inducted into the Hockey Hall of Fame; He is regarded as one of the best players to ever play professional hockey
Fee Range: $10,000 - $20,000
Secure Bobby Hull
for Your Event

Direct Sportslink secured Bobby Hull and Gordie Howe for the Herb Brooks Foundation Gala. Bobby's appearance helped make the event a huge success. He joined Gordie on stage for a Q and A after his speech and shared great stories from his playing days. It was an amazing event with true hockey legends present to help raise money for the HBF.

Bobby Hull, known as the 'Golden Jet", led the Chicago Blackhawks to the Stanley Cup, in 1961 - their third ever and first in almost 30 years. Although he originally wore number 16 then wore number 7 when the Hawks won the cup, he later switched to number 9, considered the prestige number in hockey.

Bobby Hull was famous for the speed and accuracy of his 120 mph slapshot, that many others would soon try to imitate. Hull was able to have such a fast slapshot because he and his teammate Stan Mikita were the first NHL players to curve the blades of their sticks. The curved blade allows the shooter to remain in contact with the puck for a longer period of time and increase the force behind the shot.

A member of one of the great families of hockey, his son, Brett Hull (the Golden Brett), starred in the National Hockey League and his little brother, Dennis Hull, played alongside him for the Chicago Black Hawks. His son Brett, wore his father's retired #9 for the last five games of his career.

Secure Bobby Hull for Your Event

Based on your interest in Bobby Hull as a speaker or for a personal appearance, Direct Sportslink has provided you additional links below for other sports talent with similar appearance fees, speaker topics, and categories that match Bobby Hull.