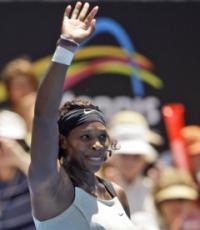 She is one of the best female tennis players of all-time winning numerous Glam Slam events; She won gold medals at the 2000 and 2008 Olympics
Fee Range: $40,000 - $50,000
Secure Serena Williams
for Your Event

Williams is one of the most recent players, male or female, to have held all four Grand Slam singles titles simultaneously. In 2005, Tennis magazine ranked her as the 17th-best player of the preceding forty years. She is the younger sister of a former World No. 1 professional female tennis player, Venus Williams.

Williams has had her own line of designer clothing called Aneres (her first name spelled backward) and has also had a line of clothing with Nike as well.

Serena funded the construction of a secondary school in Kenya in November 2008. The school is named after her. She received the Celebrity Role Model Award from the Avon Foundation in 2003 for her work in breast cancer. In 2009, Serena and her sisters became minority owners of the Miami Dolphins.

Secure Serena Williams for Your Event

Based on your interest in Serena Williams as a speaker or for a personal appearance, Direct Sportslink has provided you additional links below for other sports talent with similar appearance fees, speaker topics, and categories that match Serena Williams.